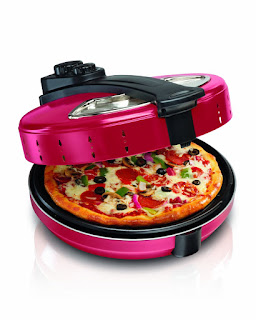 Since I was very young, pizza has been one of my favorite foods, but I do not like the greasy, high calorie pizzas that are made with white dough. I have made pizzas with wheat dough using a traditional oven and the pizzas would come out pretty good, but they took almost an hour to make, made the entire kitchen very warm, and many times the crust was over or undercooked.  I no longer have to make pizza that way anymore since I was given a Hamilton Beach Pizza Maker. It is an amazing appliance that produces delicious, perfectly cooked pizzas within minutes. I have been using it often and would like to share with you what I think about it.

Available in a beautiful, shiny red colored exterior with black accents, the pizza maker weighs only 6.4 lbs. measures 15.9 x 13.4 x 7.1 inches. It is lightweight and is very easy to carry and transport from one location to another, which makes it perfect for travelling.  When you lift up the lid, there is a circular removable cooking tray that spins slowly when the appliance is turned on for even heat distribution. The degree and timer knob are located on top of the lid and are very easy to operate.  There is also a window on the top of the lid so that you can watch your pizza being cooked and when the pizza is done cooking, a pleasant bell sound will let you know that it is ready.

I have used the pizza maker to make readymade and whole wheat pita bread pizzas, but the appliance can also be used to cook a variety of other breaded products such as- fish sticks, breaded cheese sticks, zucchini sticks, egg rolls, veggie sticks, and much more.
I did notice that if I placed the timer on the wrong setting for a small pizza, the appliance would produce a little smoke, but that was really my fault and nothing is wrong with the pizza maker itself.

Some important facts about the Hamilton Beach Pizza Maker:

· Makes great tasting pizzas, appetizers, and snacks
· Rotates for simple and even cooking
· Utilizes electricity
· Window on lid allows viewing of food while it is being cooked
· 30 minute cooking timer turns off with auto shutoff
· Cooks a 12 inch pizza faster than a traditional oven does

From the first use, I found that the Hamilton Beach Pizza Maker cooks pizzas much faster than a conventional gas oven. I also don’t need to grease the cooking tray, so when a pizza is fully cooked, it slides right off the tray with a spatula and onto a plate. When the pizza maker is cooled, it is very easy to clean and because no preheating is required, I use less electricity and it costs less to operate than a gas oven. Also, my kitchen does not retain as much heat when using the pizza maker as it does when using the oven. The Hamilton Beach Pizza Maker makes pizzas quicker, easier, crispier, and tastier than any oven I have ever used.

I highly recommend this handy pizza maker to anyone who wants hot and delicious pizzas that are easy to make and taste great.

You can find the Hamilton Beach Pizza Maker at http://amzn.to/2hmcOU1 and at stores across the country for about $34.92.

rejoice4life
Philippa Lane is a professional freelance writer and is a staff member of the Cable Muse Network. She is a prolific writer and covers a variety of subjects, such as health, beauty, appliances, travel, food, books, and automotive topics. She loves Jesus and is a mother of a beautiful daughter. Take a look at some of her articles on www.plglobalreviews.com and http://ezinearticles.com/?expert=Philippa_Lane http://tinyurl.com/4o8a3h2